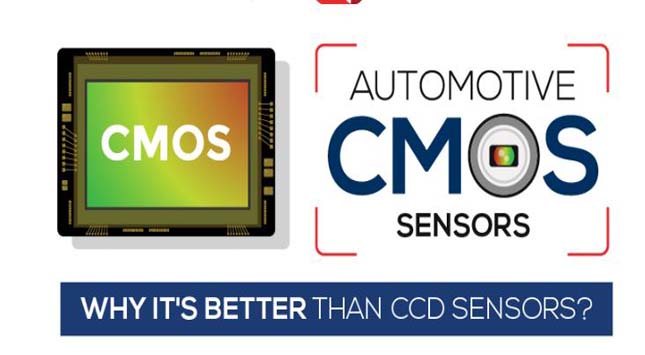 When the cheaper CMOS or Complementary Metal-Oxide Semiconductor came into the market.

The camera industry including the automotive sector was shaken thanks to its lower cost and performance comparable to its predecessor, the CCD, or the Charge-Coupled Device.

Since both sensors follow the same technology of converting light into electrons, the CMOS improved the game in terms of durability, quality, and price.

The CCD’s high price and quality can be attributed to its particular manufacturing process that allows the transportation of charges across the chip without any distortion which results in excellent fidelity and light sensitivity. However, the CMOS employs a more traditional process similar to microprocessors that made it cheaper and easier to produce.

You May Read: Nanotechnology Developments for Automotive Applications

The first CMOS sensors introduced in the market were less efficient in converting light due to its traditional manufacturing process, but continuous technological advancements like the use of onboard micro-lens arrays solved the issue resulting in equal or better sensitivity with what was once the superior CCD image sensor.

When applied for automotive use, the CMOS has no problems with light sensitivity even though the light’s photons hit the transistors instead of the photodiodes meant to convert them to electrons because headlights and taillights usually help the sensor pick up images despite the handicap.

Automotive CMOS sensors also have a fuller saturation capacity, a lower battery consumption, and an easier means of production that makes it cheaper and better than the CCD and OmniVision’s infographic provides more information regarding these advantages.