MacBook vs Windows: Which Laptop to Go For? 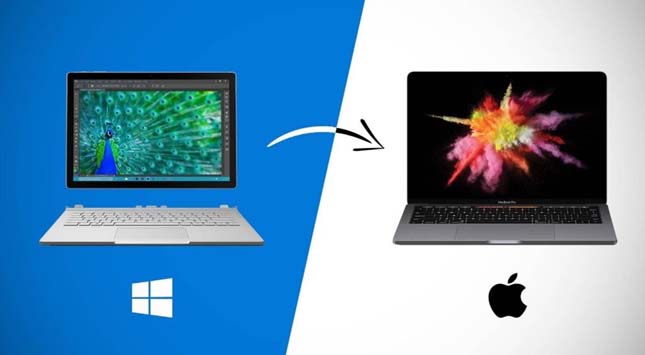 Selecting a laptop between Windows and Macbook has never been an easy task if you are somebody who has never shown a bit of interest in information related to laptops and computers.

The “Macbook vs Windows” debates have been going on for years now, discussing everyone’s different interests and preferences.

While Macbooks and Windows both have their own loyal buyers, the variance between both of these have decreased with the passing years. You really can’t go wrong with either of the choice because both has its own set of pros and cons.

There are pretty affordable options if you search for the best laptops under 600$ but choosing between the top brands of the market is always a better option.

While both of these laptops performing smoothly, I would personally choose a Windows laptop for myself and would recommend you the same. The following reasons have led me to take this decision and these reasons have been discussed below.

Laptops and computers are used by almost everyone, nowadays. From kids, to teenagers and to elderly aged people, the use of laptops and internet have become a necessity and is used in organizations for work purpose, in educational institutes for education purpose and at homes for games and entertainment.

Since Macbooks are very highly-priced and not everyone can afford to buy them for themselves, therefore Windows is preferred more and is used by the majority of the people over here. The price factor is one of the major reasons why people like buying and using a Windows laptop than a Macbook.

Macbooks are hard and complex when it comes to their usage. They are very delicate and need to be kept well and maintained safe. If you find some sort of error in your Macbook, you have to take it to an expert to make the right changes for you.

Not everyone is capable to understand and operate the mac OS really well. So in short terms, Macbooks are required to be handle with a lot of care.

On the other hand, if you talk about a Windows laptop, they are a lot more easier in use. They don’t have a very complex software like that of a Macbook and can be handled almost by everyone.

A major number of boys have a passion of playing games on the computers. They enjoy sitting indoors and streaming games on their Windows laptops. These laptops can stream games from Xbox one and play station 4.

Windows laptops and PCs graphic card can be changed and renewed whenever you want to. For gaming, the latest graphic cards are preferred and used by many of them. So if gaming is taken a little too serious at your home by the kids and the teens, then there is no better option for you than to consider and purchase a Windows laptop.

The Macbooks operating systems allow you to access to a very few games and gamers are not very fond of that. Obviously, as a gamer you would choose something that allows you a proper access to all the games that you want to play. Macbooks have a built in graphic card which is fixed and cannot be changed as per the gamer convenience.

Talking about the Windows laptops and computers, a major number of manufacturers in the market produces the hardware and most of them run and operate the Windows operating system.

When it comes to Windows laptops, you have hundreds and thousands of designs and configurations to choose or select from. You can choose whatever your preference of choice has been among all these laptops.

Though it may take time and require patience, but out of all these options you can definitely find what exactly you are looking for. Comparatively, Macbooks have a total of six computer choices with just a limited number of configurations. Also one another drawback is that Macbooks can only share a sensibility with Apple phones and tablets.

Various Designs to Choose From

Windows laptops and PCs has a various number of designs and compositions which you can easily choose from, according to your budget and price range. You have a wide range of variety to choose from, they have different laptops with different prices and features.

All the laptops have their own shapes and designs and you can definitely get the one that suits your preferences the best. While buying a Windows laptop, you have considered your budget along with the calculated hours that you would use these laptops for.

Macbooks are made to target a specific group of population. They are mostly preferred and purchased by the elites and those people who are not fond of using Windows computers for one reason or the other. Unlike Windows laptops, Macbooks do not have a wide range of variety to select or choose from.

When it comes to the design and the exterior, Macbooks are a lot more slimmer and sleek. It has also integrated its voice recognition software and siri into its desktops, but when it comes to the touch feature, Apple still is reluctant in adding that feature into its laptops and PCs.

Whereas the latest and the advanced versions of the Windows laptops have introduced touch feature in their software. New models of Windows computers have now improved and work faster, which means their speed feature has been taken into consideration. This is another reason why Windows laptops and PCs are preferred and liked better by most of the users.

Hardware Can be Changed Anytime

Windows provide this remarkable feature of setting a system according to specific needs and requirements. The hardware of the Windows PCs and laptops can be changed and renewed with time. Windows laptops have a very flexible hardware and can be updated anytime you want to do it so.

A new graphics card can be installed because the graphic card is not built in the Windows laptops and can be changed anytime. Likewise, space can be increased in Windows. In case of any damage or malfunctioning, the hardware can be completely replaced by a new one. In short, Windows PCs and laptops can be re-build according to personal choice and there is no need to waste money on features that you don’t use.

Macbooks does not have a very flexible and easy to use hardware. The graphic card cant be changed or updates because its built in the system. It is fix and you can never even think of upgrading it.

The operating system beholds and controls all the basic functioning of your laptops and PCs. It is a matter of preference. Macbook operating system dominates Windows at times while at others, Windows proves to be favored much.

The comparison can be done more like manual and auto where mac is considered as auto while Windows, manual. Enough control over a device’s progress is attained while operating Windows as we get to mingle with several settings and change them according to what we required whereas macs do not provide such a feature.

If you talk about the compatibility feature, the Macbooks operating systems are less compatible compared to that of Windows laptops.

Get It Customised According to Your Personal Preferences

One another great feature which the Windows laptops and PCs offer is that they are customizable and can be upgraded according to your own choice or preference.

The hardware can be updated and renewed whereas changes can be made in the software as well. MacBook users are not provided with the choice to renew or upgrade their computers or PCs and this in my opinion is one of the biggest drawbacks of these laptops.

Usman Akram is a Passionate Tech Blogger who loves researching and writing about the newest Gadgets and Technologies at Gearwisdom with the aim to get the users the best experience possible and help them make their lives better.

How to Choose Best Laptop for Video Editing

Why Invest On New PC When You Can Get Personal Cloud Desktop?

8 Tips You Should Consider Before Purchasing the Motherboard